Back with a short entry into the Monster! Blog, this time around with a brief review of four French films about the undead which I found had merit. Why French films? Well, I've tried my hand at watching a variety of USA made horror films on the subject.  Granted, most of these have been Netflix streaming movies, and their selection of English language zombie and ghost films is somewhat limited.

Some of the films I suffered through have included ZOMBIE DIARIES 2 (2011, unredeemable trash which lasted all of fifteen minutes before I switched it off), BONG OF THE DEAD (2011, seriously few laughs throughout what I could stand watching), ABRAHAM LINCOLN VS ZOMBIES (2012, pretty much what I expected -- so I wasn't too disappointed), ZOMBIE APOCALYPSE  REDEMPTION (2011, another dull artless bit of drudgery, this also was shut down after a about a half an hour), and, well, the list can go on. I gave them all my best shot.

And don't get me going with the TV show THE WALKING DEAD. Season one was okay... haven't been able to get into the show anytime thereafter.

I found those giant monster films on The SyFy Channel to be more satisfying. Maybe it was the commercial breaks. I'm not sure, but Eric Forsberg's MEGA PIRANHA (2010) was far for entertaining that, say, BLOODLUST ZOMBIES (2011) with its tired chemical spill resurrected undead. I haven't seen all the living dead films ever made that much is sure. There are a whole lot of American-made productions, as well as those from other countries the world over. I hear that the Indian zombie flick GO GOA GONE (2013) is fairly interesting. And the one filmed in Africa (not just someone backyard in California masking as a stand-in for Ghana, etc.) THE DEAD (2010) was okay so far as the plot ambled on a bit to a very predictable conclusion.  I wanted something better than what I saw. I wanted something that would take hold in my psyche ans not let go for a while.

I'm dead serious about my zombie films. I love a good one, and really, really find the lame half-assed productions and their attempts at exploiting the flesh-eaters for a quick buck offensive. Not that I am some kind of activist for the rights of the undead, but I want my zombie films to be memorable. NIGHT OF THE LIVING DEAD (1968), LIVING DEAD AT THE MANCHESTER MORGUE (1974), DAWN OF THE DEAD (1979), ZOMBIE (1980), NIGHTMARE CITY (1980), DR. BUTCHER, M.D. (1980), DEAD & BURIED (1981), and even RETURN OF THE LIVING DEAD (1985). All those films had at least five minutes of redeemable material in them. Most are classics. Each added to the lexicon of the undead in their own fashion.

Fast forward to today's entry and I had a fun night of watching four French films which deal with the undead in all sorts of manner. First up are the zombie films, then tomorrow if I have time there will be some mummy movies. I had read some quick reviews of both LA HORDE and MUTANTS (both from 2009), but I wasn't in the mood to be disappointed yet again.  Luckily, a miserable afternoon at my job and feeling uninspired to write for my magazine lead me to start flipping through Netflix to see what was available for streaming. 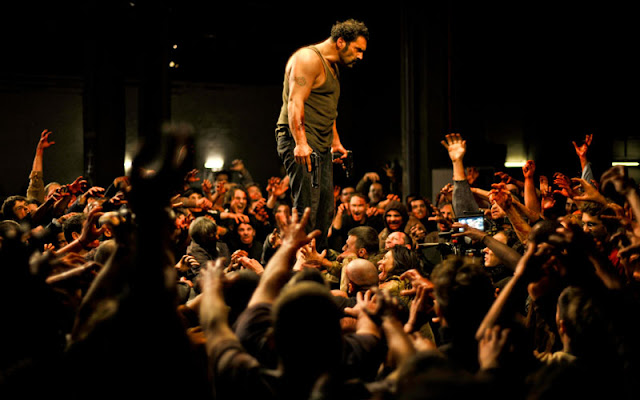 LA HORDE begins with a police raid gone terribly wrong. A group of rogue officers with personal gruges decide on attacking a small group of drug pushers holed up in a shitty apartment building somewhere in France. The thugs in the condemned complex murdered a police officer and the group of his close friends decide taking vengeance. In what I though was going to be a nod to Romero's opening scenes of DAWN OF THE DEAD, the officers decide advancing through the apartment building looking for the drug smugglers. I half expected them to open a door full of flesh-hungry ghouls and unloading their hi-powered weaponry. Nope... they just get themselves shot and captured away by the criminals.

What happens next is a fun romp throughout the building as the remaining cops and robbers teamup to dodge the very hungry ghouls/zombies that are after them. Not much is added to the lore of zombidom within LA HORDE, nevertheless the director sets up some very memorable sequences and allows the characters to be fleshed out somewhat before their ultimate demise. Without giving too much away, the scene where one of the cops is surrounded by hundreds of zombies is handled well, and the final three minutes (while depressing) does makes sense if you take into account the characters and their emotional state. 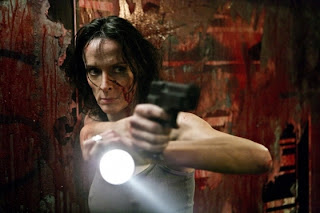 It doesn't hurt that the lead actress, Claude Perron, resembles a French woman I used to date around 10 years ago. The actress also showed up (albeit briefly) in a few additional wonderful French films such AMÉLIE (2001) and RENCONTRE AVEC LE DRAGON (2003, aka THE RED KNIGHT). In LA HORDE Perron plays a tough-as-nails female police officer who knows how to slug it out with zombies as well as handle guns. She's no withering female. You gotta love a chick who knows how to fight and carries a big gun.
Well, I do.

One gripe, and a small one, is that noone got it into their noggins that unloading an automatic weapon into a rampaging's zombies chest and legs isn't the way to kill them (again). Scene after scene when the creatures attack not one of the characters (who I assume know how to use a gun) took the required head-shot to bring a zombie down. There were some impressing fist-a-cuffs and an effective use of a refrigerator to exterminate a monster, but blasting one in the forehead (as in any Romero film) didn't occur until an undead school teacher was subdued and then taken out with bullet to the brain.

Otherwise LA HORDE loped onward with a reasonable clip to its only logical conclusion with tight camera work, good acting, and only a minimal use of computer generated gore.  And, thankfully, Netflix only had the subtitled version (I have no idea if there is  dubbed version out there, but I find most post-1980s English dubs horrible and unsatisfying -- probably because I grew up on watching dubbed foreign films on TV or at the drive-ins and got so used to the voice actors who did the dubs that anything new is just annoying at best)

Whereas LA HORDE borrowed the hyperactive virus-infected zombies from 28 DAYS (2000, which wasn't the first film is have incredible fast and ferocious zombies on your tail -- check out the before-mentioned NIGHTMARE CITY from Italian director Umberto Lenzi) and pretty much used them as a foil for its characters, the next film, MUTANTS, had the ultra-fast creatures but with an added twist. The virus that reanimates the dead also causes the living to become a monster when bitten. Lenzi explored this somewhat with his film. When I first saw NIGHTMARE CITY at our local drive-in (under the moniker CITY OF THE WALKING DEAD) I was expecting a Fulcifest of rotten reanimated corpses spewing worms and rot.

Nope, Lenzi presented us with humans changing into something else entirely, as does MUTANTS. The virus caused folks to get all gross and scabby then go nuts for human flesh.  Lenzi may not have had the budget to get that MUTANTS look to his blood-thirsty monsters, but he was on the right track. 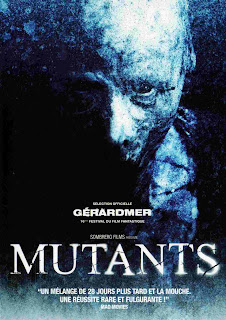 The film opens are an ambulance is racing along a lonely stretch of road some here in France. Inside we have a dying man coughing up blood, an edgy military officer, and a husband and wife paramedic team.  The bloodied man dies and is dragged from the ambulance by the soldier and shot in the head. Later on we begin to learn that some weird virus has taken control of France (and maybe the world) and all hell has broken loose. After killing the soldier in a gun battle over the survival of a (possibly) uncontaminated young man, the couple take shelter in an old hospital, the man possible mortally wounded by the gunfire.  His wife treats him and his wounds heal overnight leading us to discover he has become infected with the virus. The remainder of the film is about his gradual change into a monster and his wife's problems with other (violent) folks who also take refuge in the building.
MUTANTS is stark and moody with a (thankfully) minimal musical/weird ambient effects soundtrack and some decent acting. It doesn't hurt that the script is sparse with the dialogue rather short and curt -- giving the actors involved time to stretch their skills between sequences.

The monsters ---- well, I gotta say that they're okay. Not the most original looking creature effects, but much better than, say the similarly bald and hyperactive mutant humans that inhabited Frances Lawrence's 2007 fuck up of Richard Matheson's I AM LEGEND. At least these are monsters created with practical effects and not the cartoony CG denizens that inhabited the Will Smith flick. They bald, scrappy, have some nasty teeth and weird eyes. Okay. I can live with that.