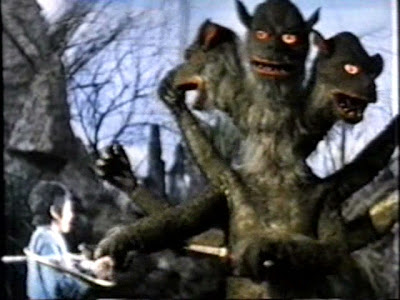 Articles on the way; in the meantime here are a select bits of video and such to keep you occupied until I get around to writing something. Which is due Saturday. Which I haven't started. Which I'm sure all of you are waiting for....


I feel another obsession coming on... first MONSTER! Blog covered Indian horror, then Taiwanese fantasy... now Japanese animal demon films that include cat ghosts and now Dog Gods! Of course, I need to finish entries on those thoughts, but in the meantime here's a trailer from the 1977 film CURSE OF THE DOG GOD:

May I present a spooky cat-ghost sequence from the 1953 Japanese horror film "Kaidan Saga yashiki" aka GHOST OF SAGA MANSION. Sadly no subtitles... P.S. despite what you think,this is NOT a spoiler if you ever want to see the film:

A trailer for one of my favourite hot and sassy Hong Kong horror films... THE EVIL CAT. A film that, sadly, not too many folks know about:

A snippet from THE LADY VAMPIRE (1959); directed by Nobuo Nakagawa.

Another recent (post blog!) Taiwanese fantasy find: 白蛇大鬧天宮 "Snake Woman's Marriage" (1975); thrilling battle sequence between a monk and a large white snake with sound effects lifted from Hammer's QUATERMAS AND THE PIT! On a quick and casual viewing the film appears to be from the same legend that Tsui Hark's farmed for his very entertaining GREEN SNAKE (青蛇) from 1993 (starring my HK heartthrob Joey Wong), and the more recent HK 3D flick THE SORCERER AND THE WHITE SNAKE (白蛇傳說) which wasn't half bad despite an over abundance of CG. However, in this scene was have good old fashion rubber monster action!

Oh, if you EVER think of fucking with Hindu The Goddess Durga or one of her devotees... don't. This dude did, and he had a very bad night (from the Telugu film AMMORU):

SHIP OF MONSTERS -- what a cool film! When I was a kid I drooled over all the photos that appeared in Famous Monsters whenever they would run their "South of the Border Horrors" or something like that. Watched this film numerous times without subtitles, and recently acquired a .srt file and after some dabbling with time signatures I was able to make my own Spanish language copy with English subs... with some delays. Oh well. And now for one of the best scenes in the movie:

In the meantime here's a snippet from one of those fascinating (for me at least) Japanese "Cat Ghost/Demon" movies; from 1954 it's director Bin Kato's GHOST CAT OF THE OKAZAKI UPHEAVAL (KAIBYO OKAZAKI-SODO). In this nail-biting scene we are witness to the possession of a young woman by a Cat Ghost! No subs and so-so quality, I must apologize:

Back in the day I used to watch anything... really, almost any kind of film I could get my mits on. Korean Ghost comedies, any version of the tale of the Monkey King, any odd foreign flick by Franco or anything with even a brief nod to something the supernatural or monstrous. TOOTHLESS VAMPIRES was a favourite, and I sat thru it a coupla times even when the film lacked any subtitles...

Vampire Bride (花嫁吸血魔, Hanayome kyūketsuma) is a very entertaining horror film; short and sweet with a fairly decent monster... but I can understand why it may not have been opted for export. It would have been too weird (ie: too Japanese) for 1960s mainstream U.S. consumption. Plus the creature is a bat-like monster/human hybrid and tends to flap its "wings" in a very modern-dance sorta way.

AND why am I not getting this blog done???  Probably because I've been watchin'' MAJIN MONSTER OF TERROR before I hit the sack for the night...
Posted by Timothy Paxton at 5:38 AM