It has been over a month since my last entry and I really have no excuse as to my tardiness other than I have been busy. Too caught up in my life outside of the blog to make a simple entry. Yea, I know: lame. So, to make up for my very late return I will have something fun for MONSTER! fans out there.

But there won't be any of the usual suspects this time around. Nope. No zombies or giant monsters or yetis or anything like that. The monsters presented for this page will be the sexy kind. I present to you the bodacious and curvacious Hindu Snake Goddess Naag in some of her various supple forms. You know, slinky snake ladies from Indian films.


What, you've never seen any of these lovely cobra maidens strut their stuff? How many of you have seen Ken Russel's 1988 film THE LAIR OF THE WHITE WORM? In that fun film we have the sexy Amanda Donohoe as Lady Sylvia Marsh, a English/Roman pagan snake goddess (in part, sort of like the Naag, which isn't really a full-fledged goddess, more of a demi-god or demon) and her rather nasty habit of biting folks, and either turning them into snake monsters or offering them up to her god as a meal. To make a long story short, there is a segment in the film where she is coaxed out of her lair by using a record of old Indian snake charmer's music. I'm sure that Russel had seen some of the Nagin or Naag films prior to making his film.

Okay, kinda sultry, but nothing when compared to the following list of snake ladies (not presented in chronological order of any kind):

In the 1986 film NAGINA we are presented with the writhing loveliness of actress Sridevi as the snake goddess/demoness/whathaveyou (and the musical talents of Laxmikant Shantaram Kudalkar and Pyarelal Ramprasad Sharma. In the film Rajni is a snake woman who has married a human to live a normal life. She is then tracked by Bhairo Nnath a religious man, who is capable of controlling snakes. The holy man want only one thing: the Cobra Jewel, and with it he can become very powerful. This plot element, the Cobra Jewel, is very popular in Naag cinema. In this scene Rajni confronts her tormentor and proceeds to perform a Naag Dance of Death... 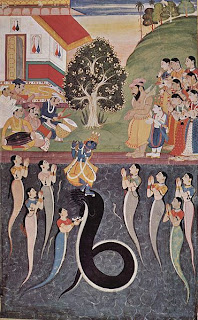 The horn which Bhairo Nnath  and his minions play is the traditional snake charmer's instrument, and the melody that Laxmikant-Pyarelal created fot he scene above is based on a traditional "Naag" theme use din numerous films since the late 1940's. The earliest film I've seen someone play this melody was from 1951 entitled NAGIN. In that very entertaining (and hugely popular mainstream film), and while there was no overtly supernatural elements in the production's storyline, the film's leading lady was always entranced by the sound of the horn.

SIDE NOTE: A possible source for the popularity of the horn-playing snake charmer may have its roots in the mythological traditions that Lord Krishna subdued the river snake god Kaliya Naag with his flute. Seen to the left is a Mogul-era painting from the 1600's depicting Krishna and the defeated Naag and the snake god's many Nagin or snake wives.

History lesson aside, I am attracted to these types of films for various reasons. The obvious one is that the monster in these films is a very beautiful woman, and I admit I have fallen for her charms... no matter how deadly she may be. Actually, in most of these films the Naag is rarely an evil creature. Most of the time she is just trying to live her life with any hassles from humans, and is either hunted by a Cobra Jewel-hungry holy man or is threatened by some ruthless hunters. In any case, she has to defend herself and if she happens to kill some annoying "hairless apes" (my apologies to Lord Hanuman and Howard the Duck) then so be it.

In the 1976 film NAGIN (not to be confused the with 1951 film of the same name) a pair of courting naags are assaulted by some idiotic humans. During a particularly sexy dance number by the female naag in human form with that of her male partner in cobra form, the ignorant hunters kill the male thinking it was  a deadly snake about to put the moves on a hapless woman. Sadly, their rash actions bring down down upon them, as the Naag kills off the offending humans one by one. In the scene to your right one of the last remaining humans comes to realizes the mistake they made by killing the female naag's mate. Ooops!

Naag films are still as immensely popular today as films like Jennifer Chambers Lynch's 2010 film HISSS. Lynch, who wrote the film as well, also made the 1993 film BOXING HELENA and is the daughter of director David Lynch. This India/USA co-production thankfully varies slightly off the traditional Naag tales of vengeance. In this film a scientist learns that he has brain cancer and plans on using the supernatural powers of the snake gods to cure him of his disease and make him immortal. Of course, nothing goes as planned and everything ends horribly for all involved.

While I found HISSS to be mildly diverting, I miss the more fantastic elements of the older films. Nevertheless, Lynch does a good job translating some of the phantasmagorical elements of the naag demon to the English-speaking world. HISSS is easy to find if you are interested in this unusual hybrid. But the sexy just wasn't there for me.

I'm so jaded. I've seen over 20 of these snake goddess films. Most are fairly high budget in their production values, and some have even pack their films with top name Bollywood actors. SHESHNAAG is a fine example of made-to-order runaway hit. This 1990 films features a lush soundtrack by Laxmikant-Pyarelal and the acting talents of stars Jeetendra, Rishi Kapoor, and the super-sexy Telugu actress Rekha as the leading Naag.

Nothing sez hot snake love like two naag gods in heat... dancing up a storm in what looks like the foothills of the Himalayas.

My favourite film of this genre has to be the 1996 film DEVI that stars yet another hot Indian actress Prema as the snake goddess. But before we get to see her we are introduced to some dancing naags in their snake form. These snake are visiting our plane of existence on a day trip from Shiva's domain. In this scene they are worshiping the phallic idol associated with Shiva.  After this bit of praise they all return to the land of the gods, except for one which is trapped here by an evil wizard.
The stranded snake goddess must protect a naag-worshiping woman from her evil family as well as dodge the unwanted advances of the evil power-hungry sorcerer who is hell-bent (literally) on destroying Devi's reputation with Shiva. The film is full of some pretty cool special effects, great dance numbers by Devi Sri Prasad, and very beautiful snake ladies.

But not of the films I've seen concerning the world of the snake gods and goddesses have top-billing actors, wonderful soundtrack, or even a budget to speak of. For every DEVI or NAGIN or SHESHNAAG -- or HISSS for that matter -- we have two dozen films like NAAGLOK, JAI MAA NAAGDEVI, JUNGLE KI NAGIN, NAAG MOHINI, and NAAG MERE SAATHI.

But more about those films in my next blog entry!
Posted by Timothy Paxton at 9:20 PM