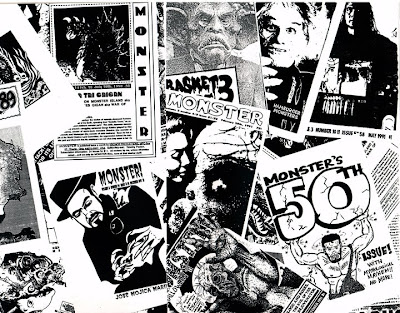 I had rightfully assumed that I would make bi-weekly installments into this blog, not unlike my Monster! fanzine of old. A bold statement indeed, and one that I failed to follow through with. Times are not what they were when I first published MONSTER! in 1988. Back then MONSTER! was a bi-weekly single sheet 'zine that was free (postage donations appreciated). I did all the writing for most of the first ten or so issues.  After a review in Factsheet Five other faithful monster-addicts donated their time and talents. The rest was a minor (or major, depending on who you talk to) publication in the bustling Silver Age of Fanzines (1985-1995) before the implosion of distribution.  The Internet made-self publishing a heck of lot easier ... albeit electronically.

Now back to 2012...
and trying to get back to a schedule. When a zine (eventually) paying subscribers like I did with MONSTER! I had to get the zine out on a regular basis. This web-based version does lend itself to sloppiness as I have no subscribers that pay for what they read. I do have electronic followers (hey!!!), but this blog is free. I don't feel all that bad when I'm late with an article or whathaveyou; even when I'm a month over due (like today). Back in the 80s and 90s folks expected an exciting zine  chockfull of reviews and articles.

For those of you that may have missed out on my paper-zine, here are some photos to peak your interest. One of these days I'll get around to scanning in what I have of my MONSTER! fanzine and make them available as Print On Demand. But... that's a project for later this year or next (if at all, depending on if I get okays from various authors of some of the important articles and reviews by folks in the know).

MONSTER! had something like 50 issues.. well, kind of. I cheated with some double issues when longer articles from folks like Horacio Higuchi became regular contributors. These lead to a 1990 ( or 91?) over-sized yearbook of reprints (which I have no copies of), a limited edition MONSTER! ZERO and eventually the magazine MONSTER! INTERNATIONAL (see photo to your right) which ran for four issues.

For those interested, copies of MONSTER! INTERNATIONAL #3 and 4 are available for $10 ppd in the USA. For folks over 18, please.  Interested? My PayPal address is "orlof@oberlin.net". Overseas or Canadian orders contact me first for S&H rates. I will even throw in a copy of PHOTO FIENDS #3, a zine I published while I was in High School -- if you promise not to laugh. It was 1978 and my composition skills were even worse than they are now! However, I did score with a Paul Blaisdell interview.

Yes, I admit it, this was a blatant attempt at unloading some of my old magazines.

This weekend (fer sure) I'll have something with a little more BITE. In the meantime, here are some additional MONSTER! related images. Caio.

Posted by Timothy Paxton at 7:00 PM