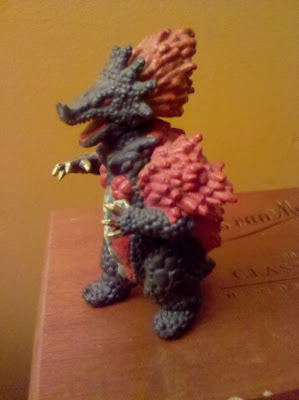 A quick bit of silliness before I delved into my next blog (due out tomorrow). I've had a small monster toy and I couldn't place its origins. I've had this small, very detailed 3" plastic critter for about ten years. It made its way from one box of toys to another; lived on a self of DVDs, and eventually migrated to my bedside table. Cute little monster. But where the hell did it come from? Nobody I showed it to had any idea.  I knew it must've been a critter from some kaiju film.

So where does my little monster fit into all of this? Well, there is a little known 1984 South Korean giant monster movie called BICHEON GOESU. It's not a great film, and it features a horribly annoying little girl who whines and cries and acts like a little shit throughout the production. Kind of like the fat little jerk in YONGARY and all those obnoxious kids in the Gamera and Godzilla series.  Anyways, when watching this film for the second time it clicked.

There as my toy destroying building, doing a poor job dodging missiles, and, sadly, NOT stomping on that annoying little girl.


UPDATE:
From August Ragone, Master Kaiju-wrangler (via the MONSTER! Blog FB page):
"This Korean film used footage from the first episode of Tsuburaya Productions' ULTRAMAN ACE! This is the "Superbeast" (synthetic organism), "Belocron" (renamed "Verocron" by some newer fans). He recently came back in episodes of ULTRAMAN MEBIUS and ULTRA GALAXY."