Today's entry is a much needed side track from what I have been covering for the past month and a half. While I find Indian horror and fantasy films a great way to have some fun exploring that country's variants on the exploitation market, after sitting thru about fifteen of these films I need a break. And they aren't short films either. So, I sat aside my new stack of DVDs and VCDs from Induna.com and dug out the old stand-by: Taiwanese Fantasy Flicks.

Now this is not to say that I have given up on Indian films, as they are truly some of the most entertaining productions on the planet. That is, if you can tolerate musical numbers and plots that are convoluted and nonsensical.

I love 'em. But not as much as Chinese fantasy films, with a special emphasis on the Taiwanese brand of craziness. To be more specific Taiwanese fantasy film from the late 1960's thru the early 90's. After that last decade I feel that the industry lost much of its frenetic passion.

I won't be handling this entry with any kind of scholarly ambition. There are other blogs sites and writers who have conquered the world of Chinese film in a more logical fashion than I'll ever attempt to do. That's the beauty of the Internet. There is so much out there to read.  Granted, I don't read as many as I should on a regular basis. That is no doubt something that will always be detrimental to my view on the world of film as a whole.  I should read more. But who has time for that when you have a stack of 30+ Indian horror VCDs to wade through?

First up, a fantasy film that I had a hard time tracking down, but was energized to do so from the poster that I own. It's for the film 小飛俠 - YOUNG FLYING HERO from 1970. (The Chinese title is a link to The Hong Kong Movie Data Base site.) The company behind this Tong Chim film took some amazing liberties with its poster. I was imagining some intense monster vs swordsman action. The film doesn't live up to what's advertized on the poster which I had framed and hung in my middle room.  It hangs there next to another Taiwanese fantasy film that I KNOW has a cool giant monster in it because of the lobby cards I happened across while searching for DEVIL FIGHTER last year. 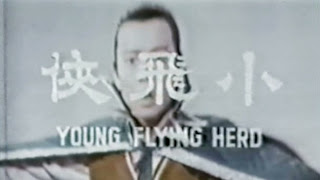 My print of YOUNG FLYING HERO is from a badly cropped and compressed VHS copy that lacked subtitles. Of course, that didn't stop me from sitting thru the film, altho the Mandarin was annoying as I am used to listening to Cantonese after decades of buying Hong Kong VCDs and DVDs. Besides that one silly annoyance, YOUNG FLYING HERO is your typical fantasy film with its cookie-cutter Wu Xia characters and overly-talkative script. The "Flying Hero" of the film is a young lad that encounters and subdues an assortment of devils of the low-budget variety. The monster aspect of the production doesn't kick in until the last fifteen minutes when two giant critters pop up and attack a castle. Our hero does his flying thing and confronts our humongous antagonists.

The action is somewhat confusing to follow; but here's what I understand from watching it a few times. The kid gets airborne and zips into the frog-monsters mouth and does some serious internal damage to the amphibian horror as it get sits ass kicked by another monster. After Toadie bites the dust it's the horned lizard monster's turn to face the magic sword of our YOUNG FLYING HERO.


Now director Poon Lui's  DEVIL FIGHTER from 1969(?) looks amazing. The poster just bursts with enthusiastic energy that I typically love about these productions. Could this film be as exciting as MAGIC WITH SPELL? That is the one film I consider the single most thrilling movie from this genre of the fantastic. More about that later. However, to whet your appetite, here are some lobbies and a poster from DEVIL FIGHTER! As per request, here's the link to "kaijuphile.com" where I found the image of the lobby set for DEVIL FIGHTER. This bulletin board/blog has been very useful to me for the past few years. 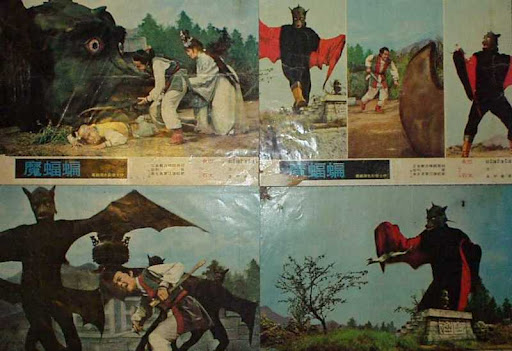 However rare DEVIL FIGHTER may be, there is a chance that the film will surface. Other such gems have in the past few years. Consider the bizarre WAR GOD (aka CALAMITY) the giant Martians vs Titanic Chinese god film from 1976.

This crazy film pits a group of vicious albino martian giants against the actual god Guan Shen Di ("God Kuan" in this film version) in a down and dirty battle to decide the fate of mankind! The balls of having a film where one of your gods tackle aliens is utter brilliance. That would be the cinematic equivalent to, say, Jesus throwing down with a pack of grays (Zeta Reticulans for the UFOlogy suave) who try to abduct some of his followers. But in Chinese cinema that's okay. Their gods are badass. Folks in the West would have a conniption and boycott theatres, fire-bomb studios, and assassinate the director.

Here's an extended battle sequence that is, for all intents and purpose, totally amazing.

This is just the tip of the iceberg.