I am currently suffering from brain freeze. A mind fart. Word shy. Bashful blog bang out. Writhering whathaveyous. THE total lack of knowing what to write about pretty much sums this malady up just fine.  While I have give myself  the job of writing at least 500 words a day for this blog (and other projects), it's the fear of not knowing what to turn out that causes the most creative constipation. The stack of recently purchased VCDs are sitting within reach. They mock me. Probably saying very rude things in Hind, or Telugu, or Urdu or whatever Indo-Aryan or Dravidian tongue is trapped within them. 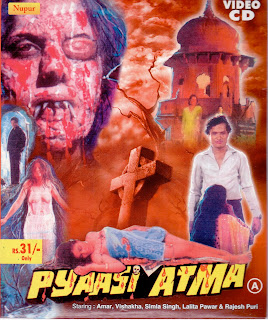 There, I've flexed enough. Time to get down to business!

As anyone knows, who has blindly bought as much crap off line  as I have in the past, what you see ain't exactly what you get. But at 75¢ to $1.25 per VCD who I am to quibble. Directors Ismail Inamdar and A.K. Misra's 1990's horror film PYAASI ATMA is a potboiler production which, due to the crap transfer (thanks, Nupur Video), it may as well b ea better film than what is presented.

The VCD art promises gore and a grungy monster with loads of blood and fangs and what looks like semi-nudity. A young married couple moves into their new home only to be threatened by an annoying ghost that terrorizes them. The angry spirit is determined to break up the marriage and run off with the husband while his wife prayers for his soul.  There is a lot of banging of windows, slamming of doors, dramatic mood lighting, and the other such typical trappings of this species of haunt.

Where's the fanged horror? Instead of the advertized ghoul we have drawn out histrionics and the monster making token "pop ups" throughout.  Just as the spectral hottie is about to take the man to her tomb for god-knows what reason, our heroine's prayers to her god pays off and the lustful spirit is obliterated in a holocaust of cleansing holy flame.

I'm not complaining too much, as I have been known to sit through quite a few Eurocine productions from the 70's and without flinching.  PYAASI ATMA is not too far off that track of filmmaking.

The upside is the exceptionally fun soundtrack delivered in the crazed mash-up format found in a good deal of these low-budget productions.


As a side note: this PYAASI ATMA is not to be confused with the vastly superior horror/ghost-possession film of the same name from 1988 and directed by P. Chandra Kumar.  It was Kumar's film I thought I was getting, but is available on to watch YouTube.

By the way, if someone every brings up the Ramsy brothers and their monster/horror films from the 70's to the present and say that they are crap slap them for me. At least their films have some element of production values, and there is an attempt at producing some chills AND they have a monster in them.  A lot less can be said of my next VCD from the pile of doom: Ashok Jamaur's BHOOTON KA HONEYMOON. 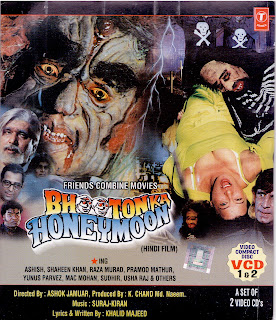 Side note again: these titillating horror films are pretty much the "grade C" of Indian cinema. They are fly-by-night productions quickly made and often shown to passengers of the Indian railway and in run-down theaters in small cities and towns. They are made for a quick buck for hungry audiences wild for such witless charms and phony thrills of a film like BHOOTON KA HONEYMOON. It doesn't matter than the monsters are some of the looniest-looking critters every the grace the screen. The oft-rowdy crowds are there to while away two and a half hours. Hell, I used to do that a few times a week at drive-ins during the summer back in my youth.  I would KILL to have this kind of nuttiness still around.

Okay, so the kids have stumbled onto a haunted "honeymoon mansion" and they are killed off one by one by a variety of spectral horrors and sexy ghosts. The only ones left are our busty raven-haired leading lady and her man who, in a wonderful musical show of what I love about Indian cinema, must face some dancing and singing ghouls. (The much-maligned TROLL 2 can't hold a candle to some of the monsters in this film!).

Sadly, it turns out that the monsters are in reality a gang of criminals in the guise of the undead. Damn! Who would have thunked that? I was bummed out at that revelation.