One could feel jaded in this world of instant gratification via the internet. Torrent sites and YouTube does satisfy my sweet tooth for the easily discovered cinematic candies. But to experience the sheer thrill of the unknown may I suggest throwing all care to the winds and knuckle down to some random purchasing of movies from legit websites.

I'm not sure about induna.com, a site that I have recently had the pleasure to peruse. With VCDs for as little as 75¢ and DVDs as cheap as $1.75 it would seem that it's a grey market store. Or maybe that's the market value for these  products. The selection of obscure fantasy, horror, and mythological movies is incredible. Wading through their selection is not for the faint of heart, as a lot of what they offer probably doesn't have English subtitles, especially in the rare VCD department (VCDs [video CDs] are VHS and sub-VHS quality MPEG-2 encoded films).

My recent purchase was VCD heavy which has meant I have been sitting thru Indian films in two or three languages I am not familiar with (altho I am beginning to recognize some word and phrases thru observation). Hindi is the most common, with what sounds like Tamil, Telugu, Malayalam or Bengali in most of the rest (if I can see written text in the film I can ID it better).


Now on with the films: 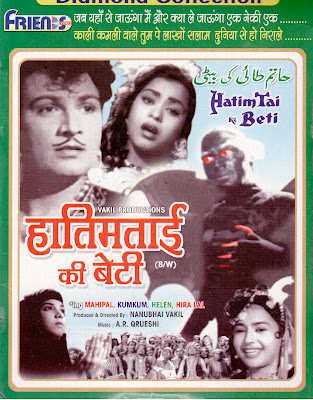 Right off the bat we have HATIMTAI KI BETI, a famous fantasy film from 1955 (previously filmed in the 1930's and  40's), and one I have been after for a few years based on just this VCD cover alone. Along with all the gods and goddesses and the singing and dancing (and wonderfully crafted set designs) you have this winged black demon creature. Of course, the VCD lacks subtitles, but my girlfriend and I sat thru the first disc (Indian VCDs are typically two-three disc set, as each video disc can hold about 60-90 minutes of encoded video) without any real hassles. I finished up the second early this morning.

At this point in time I should mention I'll sit thru a foreign film I don't understand AND that lacks subtitles because, well, how else am I going to see it? Sure, some clarification of the plot would help, but the majority of these films are nowhere near an Indian version of MY DINNER WITH ANDRE.

HATIMTAI KI BETI is not the most exciting fantasy film unless you are a fan of dramatic Indian cinema and the sort. From what I gather the film follows one of the many adventures of a popular 6th Centuery Arabic adventurer known as Hatim al-Tai.  The creature in the film pops up a few times just to pester what I assume is some goddess. He seems to push her into making life troublesome for a variety of humans (á la Lucifer and Job).  Not too far out of the ordinary, unless you are a fan of the actress "Helen" as this film is one of her first roles.  The musical numbers are catchy and the two of the leading ladies are drop-dead gorgeous.

The film was later remade in 1990 as HAATIMTAI with more fantastic elements, including a giant, some hairy big-foot-looking monsters, a flying carpet and so forth. More about that film later.