Back in the day, before technology could deliver tantalizing images of films directly to you on your home computer or on your phone or tablet, paper-based (rather than pixal) posters were the way to get your attention. Sure, TV commercials and film previews in a theater helped, but non-invasive, full color posters were works of art. Actually, the art of poster-design hasn't changed much since the 70's and the impact that STAR WARS had on the industry. 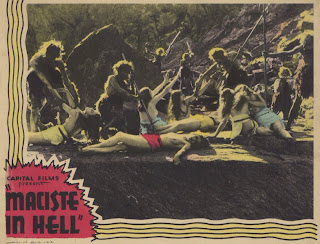 Of course I'm rambling about Western-based posters. Hollywood has influenced the look of film since the USA began cranking out blockbusters in the 1920's. Worldwide, each country had their own epic classics to compete with anything the States produced (check out Guido Brignone's MACISTE IN HELL from 1925 available in a slightly truncated form on a Oldies.com DVD). However, audiences in those counties, for the most part, adored Hollywood, and pretty soon most of those regional studios fell into second, third or fourth place (not all, as Germany had Fritz Lang to make classics).  I digress. Posters. Back to posters. 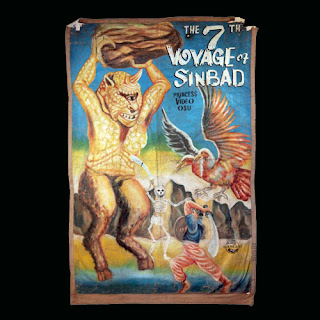 The bloated designs for STAR WARS and RAIDERS OF THE LOST ARK pretty much changed the lush or arty posters of the 60's to mid 70's.  For mainstream fantasy films, posters pretty much sucked after 1978. Mass produced cookie-cutter clutter. Luckily, we have hand-painted beauties from Africa, India, Pakistan, and other non-western locales to stimulate the imagination. Or, at least my imagination. These huge one-of-a-kind advertizements are now much sought after items and fetch hefty sums on Ebay and from private collectors AND galleries. I guess they're being bought up by hipsters. The posters produced by folks at African-based video stores in Europe and the US (and on their home soil) are for the new and the old. There is no bias against old films - no misplaced hipster "kitsch", as they are given the love that only a naïveté auteur could produce. Check out this one for the 1958 Ray Harryhausen fantasy classic 7TH VOYAGE OF SINBAD with the distinctive Cyclops that was the highwater for animated monsters for decades. I would kill for this poster. It's from Ghana. And one for the late Don Dohler's ALIEN FACTOR (1978). It's pretty clear: these are MONSTER movies!

The locally-grown variety from Ghana have insane imagery as well, although the monsters on these works of art don't, for the most part. really appear in the films. I've sat through around a dozen or so Ghanaian or Nigerian horror/monster/fantasy/magical realism movies and the critters that inhabit these shot-on-videop grinders are usually folks in greasepaint who wear plastic horns on their heads. But the posters.... sheer beauty: 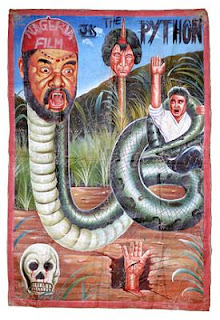 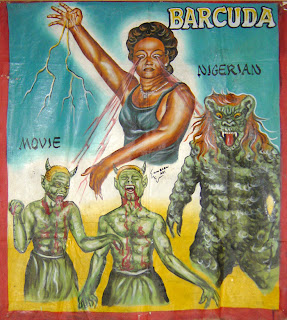 If I had the cash and a wall in my house where I could display these critters I would.

Tomorrow: Even more monstrous beauties from India, Thailand, Pakistan, and a few other non-western nations.
Posted by Timothy Paxton at 5:13 AM