Before I blather on about how intensely amusing I found this 1991 family film from Indian directors Tulsi and Shyam Ramasy, there is something I need to get off my chest. As a middle aged man, and a fair to middling writer in this field of film study and review, there are portions of my life when instances usually considered not at all that pleasing to the majority, strikes me as highly diverting. I have been searching for AJOOBA KUDRAT KAA for some time, as part of my study of the "bigfoot" genre. I even went so far as buying a 1-sheet of the film on Ebay. It was shipped from Tripoli, Lebanon. It rocks.

I was happy to note that the film was a Ramsay family production which typically mean that it's going to turn out to be some sort of rough ride.  This is a fun and violent monster movie musical for kids. Astounding. But before I continue, here's what really struck me about the film.

No. seriously, the plot moves along at a pace which most Ramsay films don't, and there are some charming musical numbers. For hose of you who enjoy Indian films like i do, you come to expect singing and dancing that appears out of nowhere smack-dab in between the action or dramatic plot.  "Yeti We LoveYou" is a six minute opus sung by a little girl to her big hairy goofball of a friend: the Yeti, a bumbling monster that has already slaughtered at least four people.

As with most Indian films, the soundtrack was released on vinyl as well as audio cassette. I have yet to see a CD release anywhere.  "Yeti We Love You" is appears on the soundtrack in both a happy and sad version!  The compositions on this tape are probably the ONLY original tracks to appear in AJOOBA KUDRAT KAA, as the remainder of the film is scored with cues from numerous Ennio Morricone westerns, as well as  some Kraftwerk and other spacerock ditties. It's as if the Ramsays spent too much money on the monster suit to bother with an incidental score.

Oh well.... before I get too carried away with the plot and all, here's the hit single "Yeti We Love You".

Makes your heart swell with love.  No? Maybe the bile is gurgling in the back of your throat. That's a possibility.

So what is this kid doing frolicking in the snowy mountains of India? Northern India is home to the Himalayas, with peaks over 20,000 feet. Not only does it snow here, but it snows every month of the year, with peaks covered in glaciers. That's where the Yeti comes in. The young girl, Sasha by name, is the daughter of a forest ranger who works in that region. She is kidnapped by some nasty gangsters who want to ransom her back to Ranger and his sassy wife. The girl escapes and encounters the Yeti who is a friendly monster despite crushing the skulls of some men in the opening sequence of the film.


Here's a YouTube link to the entire film (in 15 parts!). No subtitles, but you don't really need them. If you want to own this film may I suggest ordering the VCD like I did from Induna.com: http://www.induna.com/1000003635-productdetails/. The VCD is presented in widescreen and of very good quality for MPEG-2 compression. For those of you unfamiliar with VCDs, they are video CD that are easily playable on most DVD or Blu Ray players. They possess  a sub-quality like that of an old VHS video tape that has begun to deteriorate. This is one of the better transfers I've experienced, and looks like the same source by the person who uploaded it to YouTube.


In the meantime our young heroine makes friends with the snow monster and they get on swimmingly. Soon Sasha is rescued by her parents and taken home where she publicizes her relation with the monster, alerting the creature's existence to a shady European who wants to exploit the Yeti for financial reasons.  The Yeti is soon captured and locked away in a cage where it is teased and humiliated by leering and sneering gangsters and circus folk. Of course, this is intensified by a totally messed up and offensive dance routine with its Naga "tribesmen" in blackface.

Can the Yeti be saved from this abuse when Sasha, her band of girlfriends, and her parents and their band of do-gooders decide to raid the gang's compound? Will there be more song and dance numbers? Will there be violent Yeti vengeance? Yes. Yes. YES!


Exploitation cinema buffs are probably more familiar with the Ramasys' work thru some of the hoary horror films they directed and/or produced since the late 60's until recent. Tulsi Ramsay usually co-directed with either his brothers Shyam or Kumar:  BANDHA DARWAZA (Hindu Dracula), TAHKNANA (The Celler), and a handful of other of the more popular films are available on DVD with English subtitles (available thru Amazon.com).  AJOOBA KUDRAT KAA ("The Magnificent Guardian"), as far as I can tell, is only available on VCD or YouTube. 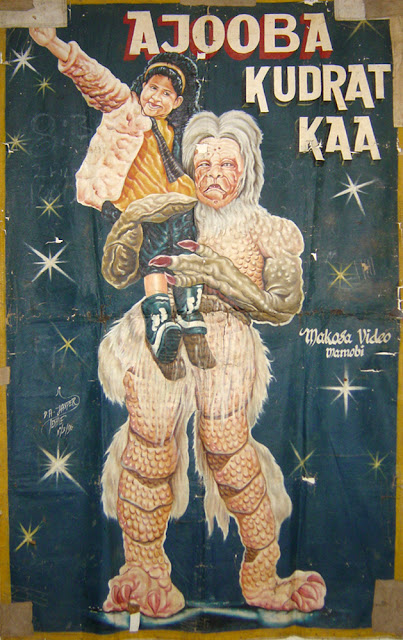 Hairy monsters not that uncommon in Indian fantasy, horror or mythological (as they are called on Indian video websites) film. Most of the critters are men in standard 1940's looking monkey suits with a hairy face a mouthful of fangs. They are usually galumphing beasts that grunt, roar, and growl as they stagger, stiff-leggedly, after the gorgeous heroine or brawny hero.  That's what makes the Yeti in  AJOOBA KUDRAT KAA so unusual. It appears as if the Ramasys' spent time making the monster somewhat believable. They did a pretty good job, although the Yeti still ambles after its prey looking as if any second the poor actor in the monster suit is going to land face first in the snow.

It's a pity that this wacky mutant of Indian family entertainment and horror was never released in the US. It apparently played in quit a few countries, includes Nigeria and Ghana in Africa. I have located one of those lovely hand-painted movie posters so popular with collectors of "kitsch" (which, by the way, I don't considers these works of art being).

I have one gripe with the film. It seems that there is a worldwide conspiracy in making any kid in a "children's film" the most obnoxious creature on earth. For some odd reason the monsters in these movies seem to identify with the horribly spoiled boys and girls that speak back to their elders, cause all sorts of havoc, and and just won't shut up for one fucking second.  That fact and the mandatory comedic relief that plagues Indian cinema makes ore than a few minutes of AJOOBA KUDRAT KAA cringe-worthy.

Those of you who are from my generation, you'll probably remember the 1960's Gamera films. In these wonderful giant monster ("kaiju) movies, Gamera, the gargantuan jet-propelled flying turtle, is typically involved with battling a bad monster while attempting to save both the Earth and an bunch of obnoxious kids. As a youngster myself in the 60's and 70's I was hoping that, at least in one of Gamera's many adventures, he'd squash the brats.  In AJOOBA KUDRAT KAA Sasha is such a winy shit that I was half-expecting the Yeti to crush her skull as easily as it dispatched the badguys.

For those interested, here is some artwork for other films by the Ramsay family: 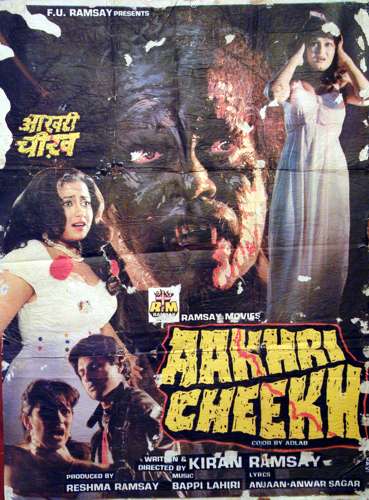 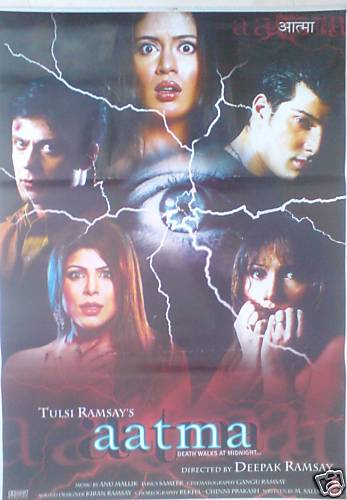 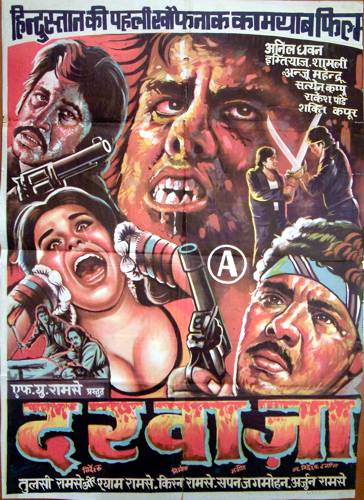 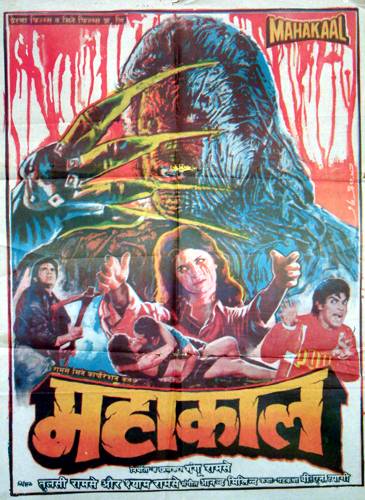 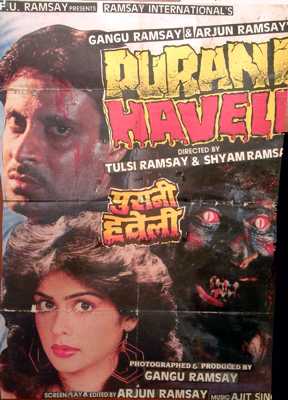 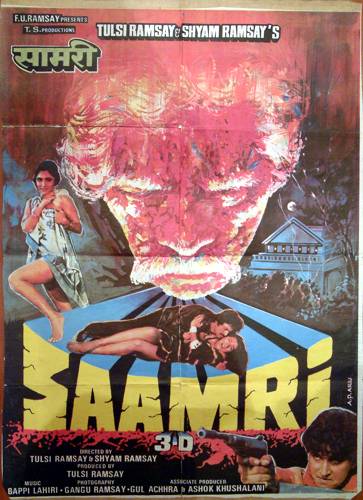 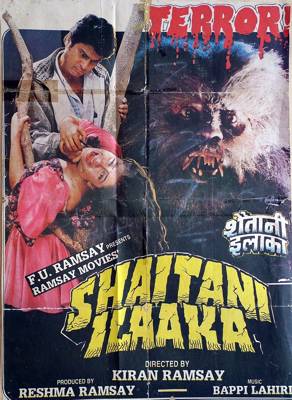 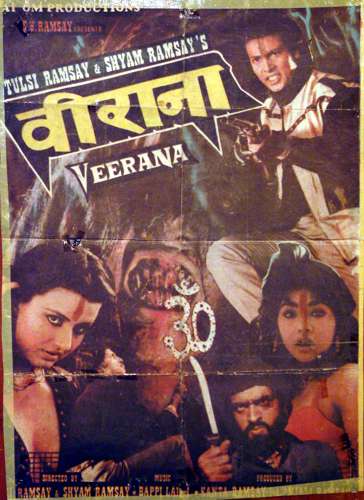 Posted by Timothy Paxton at 3:14 PM