The best part of recieving a large bundle or two of VCDs and DVDs in the mail is sitting thru ALL of them. Yes, even when they're the infamous "Grade C" horror films from all parts of India. These films were (are?) productions made outside of the "Bollywood" system -- so far out infact that they shame our Western indie movies in their abundance.

The closest comparison would be to the movie boom of the 60's and 70's when drive-ins were chockful of wacky regionally produced and distributed US films.  Double, triple and dusk to dawn bills often included these low-budget beauties as well as foreign films which played after the (maybe) A-list first feature. Numerous fly-by-night companies were formed and folded within months of a production, with the end result of giving birth to some remarkable offspring.

For thosw not in the know, India produces the most films per year than any other country. The Indians love cinema. Good or bad. So, there is a need for a lot of product. Imagine hundreds of films with hairy giants, possessed maidens, toothy monsters, scarred maniacs and various types of the living dead produced from the early 60's right on up to as recent as, well, last year as far as I can tell.  Slap-dash creations fabricated for folks who need their (sometimes) daily cinematic fix on the cheap. For the most part they all look like crap.

Okay, that last line wasn't too truthful. It wasn't too far off the mark, altogether hastily remarked.  There are some films, like their cousins from Taiwan and Hong Kong, as well as the Eurocine scene and even the US, that raise above deplorable. They are actually quite good. For every three dozen BAHOOTON KA HONEYMOONs with its rancid dance sequences and sorry excuses for monsters, you have superior works by the Ramsy family or, for today's blog, director P. Chandra Kumar and his film CHUDAIL: THE WITCH from 1997.

But before we continue, a little cultural background on the type of monster that is in the film. The title is a little misleading as a Chudail (चुडेल) or Churel, as the entity is more commonly known, is a female ghost from Hindu folklore that feeds on the energy of young virile men.  The film kinda gets this right once the plot kicks into high gear.

It's a stormy night (as the nights almost always seem to be in these films) and a family is in desperate need of a healer or holy man to save the life of the head of the household.  A handsome tantrik holy man arrives to assist the family. As the stricken man is being treated by means of prayer and holy flowers, the handsome tantrik is distracted by the impressive bosom of the old man's young daughter Sundari (actress Poonam Das Gupta) . After the ceremony is completed and it seems that the once ailing patriarch is on his way to recovery, the holy man and Sundari hook up for a night of sexual healing. In the midst of their tryst they are discovered by her father who falls to his death down a stone stairwell.

The energetic couple continue their passion, to the point where our holy man informs his the gorgeous brunette that he is using her sexual life force to extend his own, thrusting within her with a magical energy and harvesting it later during their mad embrace. Sundari plays along until the time is right and then kills her master and in turn absorbs his energy. This is witnessed by the holy man's servant who pledges his undying devotion to the "wicked" woman. The duo then sets out to ensnare you haughty men for a night of passionate yet life-essence draining sex.

All seems to going jim-dandy until the "witch" is trapped in a ring of holy fire set up yet more holy men, and three nine-inch nails are driven into her skull. Sundari's lifeless body is then encased in blessed coffin and buried a isolated tomb, and her man servant is driven off into the wilderness.
That was he first 30-odd minutes of the film.  Now this is where the Chudail comes in.

"Years Later" the tomb is disturbed and the dessicated body of the witchy woman is uncovered. After some singing and dance sequences (which aren't that badly composed or choreographed), and the typical and totally unnecessary comedic relief, AND a romantic subplot, the monster finally makes its appearance. Once the body is removed from the underground crypt and placed in the local morgue for examination, the witch's manservant makes his reappearance and upon sneaking into the hospital removes the nails from the witch's skull. 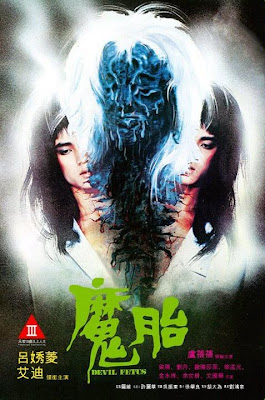 What happens next is pretty comparable to Hong Kong horror films from the 80's. Two prime examples being THE RAPE AFTER and DEVIL FETUS, two incredible films which are worth watching if you have a chance. Kumar's handling of the subject matter is naturally different from the Chinese films, culturally speaking. There is no nudity in this print, but I have read that (not unlike Eurocine productions of the 70's and 80's) saucy scenes of naked breasts and full-on lip-to-lip kissing were inserted for the more raucous off-the-beaten-track movie houses. The gore is not as abundant or icky as in DEVIL FETUS, but the mood and sheer creepy craziness is a most on par with the aforementioned films.

As the body count mounts the leader of the archeological team that found the tomb has to find a way to save both himself and the woman he loves from the Chudail and her insatiable sexual appetite. But, not before he has a chance to have a sultry dance with her. I mean, this wouldn't be a good Indian horror film without a sexy dance number. The film comes to an explosive (literally) climax in a series of mad dashes around the underground tomb as the monster closes in on her prey.

Not a bad film at all. Even better since it clocks in at 94 minutes, rather than the usual running time of most Indian films which is around two to three hours.

Director Kumar has made a few other "Grade C" horror films, although he seems to be more famous for ADIPAPAM (1988) which is his adult softcore Malayalam language version of the biblical Adam and Eve story.  I am currently on the hunt for more of his films, as he made around fifty movies during his career.  I am also not too certain it is he same director. Neither of the two horror films made by this P. Chandra Kumar (or P. Chandrakumar) appear in of his filmography on imdb.com.

Well, anyways, CHUDIAL was a delight. There have been numerous other films featuring similar titles that seem to have variations of the chudail ghost figured into their plot line. It will take some time, but I'll hunt them down down and make them mine! In the meantime, here are some posters or VCD cover art for some of those elusive titles: 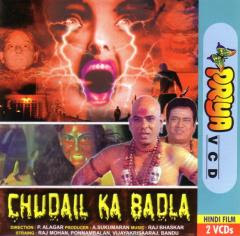 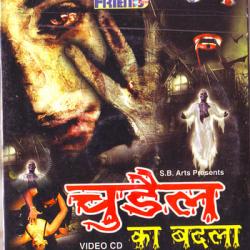 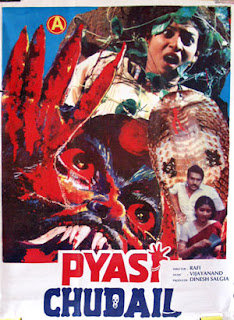 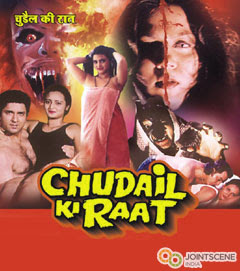 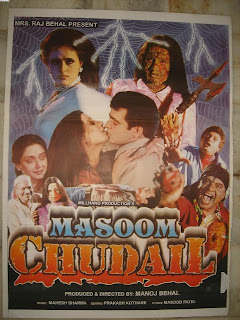 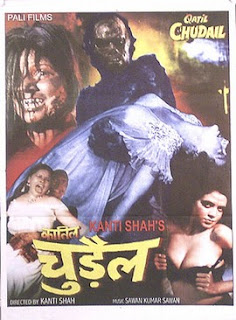 Posted by Timothy Paxton at 4:08 PM