The college town had two pharmacies, and they both had impressive racks. Magazine racks, that is. The clerks in both store where wizened creatures with eye-glasses and beehive wigs, and not at all appealing.  Every Thursday after school the magazine truck would toss a few wonderful brown-papered & wire wrapped packages in front of each store. Typically these bundles would land with a thump, and a huddled pack of kids and a few of the cooler adults in town would poke about the lot to see what may have been delivered. This paper and ink manna from heaven. The corner drug store had more comics than magazines, and mostly Marvel and DC comic. The other store had the movie magazines, the less popular comics... and cigars. For some odd reason that's why he ended up there. The excitable scent of fresh ink and unburnt tobacco.  Such an incredible aroma. The kid stood in front of the magazine rack. His eyes scanned every shelf. Bold colors, gutsy fonts, wonderful images for just about anyone's fancy. Not much this week, tho. Maybe next week will have more Halloweenie stuff. Being ten he wasn't too keen on the boobies books that populated the top shelf. That isn't too say that the titillating peek-a-boo nipple of Lynn Myers didn't arouse some alien ache in his oft-confused but getting-there-pubescent brain. Playboy would have to wait until somewhat later in life to fuse that fleshy obsession with his current fascination of the fantastic. Besides, Playboy costs a dollar, and that was all the boy had in his pocket, said crumbled bill of that exact domination and a some pennies for tax. 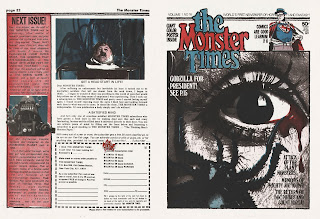 A dollar could buy a lot of fun in 1972, and he already picked out two comics from the spinner behind him. Especially cool was the Ditko cover for "Many Ghosts Of Dr. Graves".  Two comics would cost him 40¢, that would leave him enough for either the newest issue of "The Monster Times". Its cover screamed GODZILLA FOR PRESIDENT! SEE Pg 15 and ATTACK OF THE PLANT MONSTERS!

He was dying to look through the magazine to see what the hell 'Zilla could do for the country. But, he looked around and saw Mean ol' Wrinkled eyeing him. The blue-haired hag took a drag on the menthol (yuck) cigarette and squinted at him. "This isn't a library," would be the tired and worn barely-audible utterance from the pharmacy's counter if he even attempted to flip thru the magazine. Even if he tried to sneak a peek, it didn't help that "The Monster Times" was a publication you had to unfold like a newspaper to read. 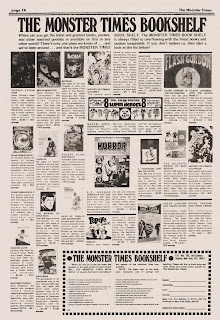 It was a good buy. Charlton never failed to deliver with some excellent artwork, and these two comics had both Steve Ditko and Tom Sutton.

"The Monster Times" was incredibly informative and held delicious secrets that he would uncover for weeks to come. There was also the The Monster Times Bookshelf that promised even more information overload at a price.  If only he could convince his mother to order some of the books. Christmas was coming up in a few months. Or maybe his younger brother would ask for some. Despite being a pain-in-the-neck the that kid was sheer gold for picking out the very coolest of the cool.

That was my life as a child.  Nothing much as changed, other than I am lot older.
Posted by Timothy Paxton at 12:16 PM