I'm not sure how important it is nowadays, but not too long ago posters were the way to go when it came to promoting a film. At a movie theater you'd gawk (well, at least I did) at the artwork presented on the "Coming Soon" marquees, with hopes that these wonderful films would end up at least one of the local theaters around where I lived (most of the time they didn't). In a vain attempt not to sound like an ol' fuddy-duddy, I won't rail too much against the recent, lame poster designs that most studio's pump out. In fact, I won't waste my time on US movie posters at all.

Yep, it's that time again. Time again to present to you, dear blog-aholics, a dozen or so non-western advertizements for thrilling monster films that you'll probably never get around to seeing. God knows, I've had a hard time tracking some of the films I've been writing about. They aren't your usual Netflix or Blockbuster releases.

Let's start out with my current fascination, the Indian Monster Movies:
GHABRAHAT, from 1989 and director Sunil Kumar.  No other information on this film. Looks cool, huh?  The film sports a classy Ramsy Brothers-looking poster. Classy? Ramsy? Hey, when you've seen as many of these "Grade C" films as I have, then that moniker fit. It's on my list of films to look for. 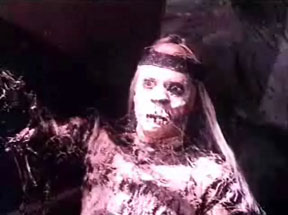 On a side note: the monster reminds me of the skeletal creature from THE DEATH CURSE OF TARTU (1966). If you haven't had the chance to see this USA made horror film, then you should treat yourself to some of its charm. This is as close to an Indian monster movie an American production gets. No, seriously, it has all the right elements. Trust me.

Next on my list is a film that I have had on VHS since I got it from a pen pal of mine in the early 90's. I have since re-discovered it on VCD. It's the monsterific JAANI DUSHMAN from 1979, despite looking  another Ramsy film, JAANI DUSHMAN seems to have benefited from a slightly higher budget, as along with its superior musical numbers, its monster is an incredible and very striking bouffant-headed werewolf.
The creature takes to abusing folks in the forest and in a spooky underground warren/temple surrounding a spooky mansion (as it always is) . The two posters presented are the classic Hindi one and a wonderfully crafted hand-painted canvas poster for what I believe was the Urdu market. I have also seen another design where the artist takes huge liberties in lifting Hammer's CURSE OF THE WEREWOLF and puts it to use to illustrate their film. And considering what I can make of the film, that intellectual theft is not too far of the plot.

In this exciting scene, our hero and a few of his friends has trapped the monster and in a desperate attempt to smite the thing with a trident of Shiva. The hairy beast lumbers about, stomping and grunting like most of its cinematic creature cousins.

To round things off here are a few more Indian Monster Movie posters of films I NEED TO SEE: