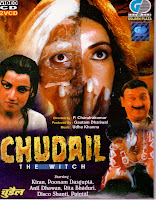 Before some of you decide to plunk down a load of cash on some of these VCDs I'm written about (and many other I haven't), let me give a heads up. DON'T EXPECT DVD QUALITY.

Some of the better VCDs are pretty good looking as their their encoding and source material equals VHS quality. Here's an example from CHUDAIL: THE WITCH which was released by Golden Plaza Video: 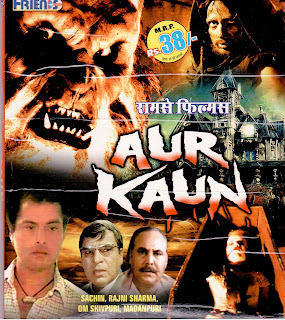 Looks okay. This scene is crazy and reminds me of some of the odder and more exciting low-budget 80's horror film from HK or Taiwan. Anyways, the next video is an excerpt from the Friends Video VCD release of the Ramsay family's sorry excuse for a horror film called AUR KAUN. The monster-filled artwork for the VCD is very misleading, as I don't remember seeing ANY of these hoary bits in the film.

Then sitting down to watch the two disc set is even more disappointing. A sad purchase indeed.

In addition to a sub-par encoding of the video track, the audio is so over-saturated as to make it almost too dangerous to try and play on your DVD player without damaging your speakers. I had to keep it on the lowest setting to even try and understand the audio. What's worse is that the source for this VCD comes from a shitty VHS that has problems tracking. Geeeeez!

So, don't expect a lot when you pay 75¢ to $2.25 for a VCD. Paying a few bucks more for the DVD of  AUR KAUN won;t guarantee the quality won't be any better, which is why I haven't given that one a chance.  Yet.
Posted by Timothy Paxton at 1:16 PM